David Nearpass, a longtime music educator at Woodrow Wilson Middle School, was honored recently when the music hallway was named “Nearpass Hall” in his honor.

“It seems only fitting that someone who has dedicated so much of his life to making a difference in students’ lives should be recognized by naming the music hallway after him,” said Tina Elliott, who helped organize the event, which was attended by parents, former students, Vigo County School Corp. administrators and board members.

During his 37 years at Woodrow Wilson, he developed renowned concert and jazz programs, Elliott said. His bands consistently earned superior ratings at ISSMA and other organizational contests and festivals. In its 21 years of existence, the jazz ensemble was named a Middle School Honor Band 10 times at the Purdue Jazz Festival and twice at the Rolling Meadows Jazz Festival (Chicago). The Woodrow Wilson Jazz Ensemble or Jazz Combo were invited to open the night concert at the University of Louisville Jazz Festival five different years.

Nearpass earned a bachelor of music and master of science degree from Indiana State University, where his principal instrument was trombone. During his time as an undergraduate student at Indiana State, he was involved with the first Phi Mu Alpha Sinfonia sponsored jazz festival.

He was a member of the Terre Haute Symphony from 1978 until 1985 and director of the Terre Haute Youth Symphony during its 1982 and 1983 seasons. He served on the staff of the Indiana State University Summer Concert Band Workshop from 1989 through 1995 and as director of their Junior High School Camp from 1992 through 1995. Nearpass has also served as director of bands at Rose-Hulman Institute of Technology and conducted the Jazz Ensemble at Indiana State University from 1999 through 2004.

In 1996, Mr. Nearpass was honored with WTHI-TV 10’s Golden Apple award as an outstanding Wabash Valley educator and by Rose-Hulman Institute of Technology with their Outstanding Indiana Secondary Educator Award. In 1998, MCL presented  Nearpass with their inaugural Legacy Builder Award.

When not in the classroom, Nearpass can often be found with a camera in his hand taking pictures at motorsports events throughout the Midwest. 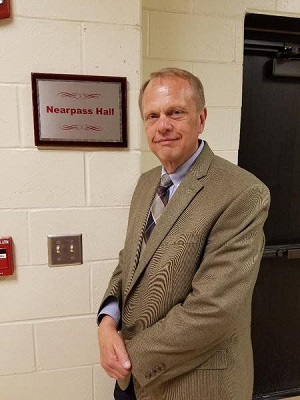