Welcome to the College of Arts and Sciences’ Student Media Department. Our students engage in wide range of media-production activities. From your first days on campus until your last, you can be involved in creating works for the student body, the campus and the community. Along the way, you can get hands-on experience producing materials for a variety of media outlets, including a newspaper, yearbook, cable television channel, two radio stations, sports video network, websites and a commercial video production unit. 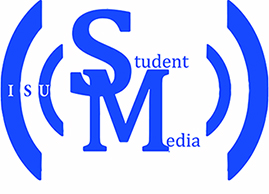 Student Media is the umbrella organization for the operating units responsible for creating and distributing Student Media products, and it coordinates collaboration and convergence among the individual media outlets. Our staff is here to help you make the most of your experience at Indiana State University.

The student newspaper of ISU, the Indiana Statesman, is delivered digitally and hits stands in print form two days a week. You can be involved in reporting, opinion writing, photography, editing, advertising sales, graphic design in news and advertising, circulation management and videography.

The Sycamore is Indiana State’s yearbook. This book is filled with photos and short stories about campus life and ISU students, faculty and staff.  It is published each May and is available for print-on-demand or online. Students work as writers, photographers, page designers, editors and marketing managers. Our Student Publications Director, responsible for both the newspaper and the yearbook, is Martha Milner.

WZIS, 90.7 FM, is the student-staffed radio station. It broadcasts popular music, news and public affairs, and sports to the Wabash Valley. At the station, students work as disc jockeys, sports announcers and commentators, news and public affairs reporters and hosts, station directors and managers, and in promotions, underwriting or audio production. We also provide DJ services for campus events. Our FM radio manager is Rich Green.

WISU, 89.7 FM, is the public radio affiliate of WFYI-FM in Indianapolis. It provides National Public Radio and other local, state and national public affairs programming to west-central Indiana and east-central Illinois. Students are engaged in creating and airing public affairs shows as producers, engineers and coordinators. .

At Sycamore Video, you can be involved in producing television shows that are cablecast on Channel 20-1 or Channel 76 on the campus system. Each week, the staff produces a news program and interview show, and short video pieces are created throughout the week. Students work behind the cameras and microphones, as video reporters and television anchors, in video editing, as technicians in the television production studio, and as video production managers. Our student video production manager is Jeff Perkins.

Syc Creations includes both our digital media team and the corporate video production unit. The Digital Team develops and maintains the seven websites operated by Student Media units. Most are incorporated under the portal ISUStudentmedia.com. Students are involved as multimedia specialists, graphic designers, web developers and webmasters. This group also produces client-driven video productions for customers on campus and in the community. Students are involved in pre-production planning and coordination, on-location shooting and recording, and video editing. This group is led by Dr. Chad Clark.

Student Media is open to any major, and any class rank. About half of our participants are Communication majors, but others are spread from across campus.

We’re glad you are checking out our webpages. We’re based in Dreiser Hall, and we would be delighted to see you come by. Otherwise, you can use the contact information on this page.